What is an Ice Dam? Repair & Prevention Services

An ice dam is a ridge of ice that forms at the edge of a roof and prevents melting snow (water) from draining off the roof. The water that backs up behind the dam can leak into a home and cause damage to walls, ceilings, insulation, and other areas. If you see tell-tale icicles forming, it’s time to take action to prevent a bigger loss that could result in leaks, ruined ceilings, and mold. 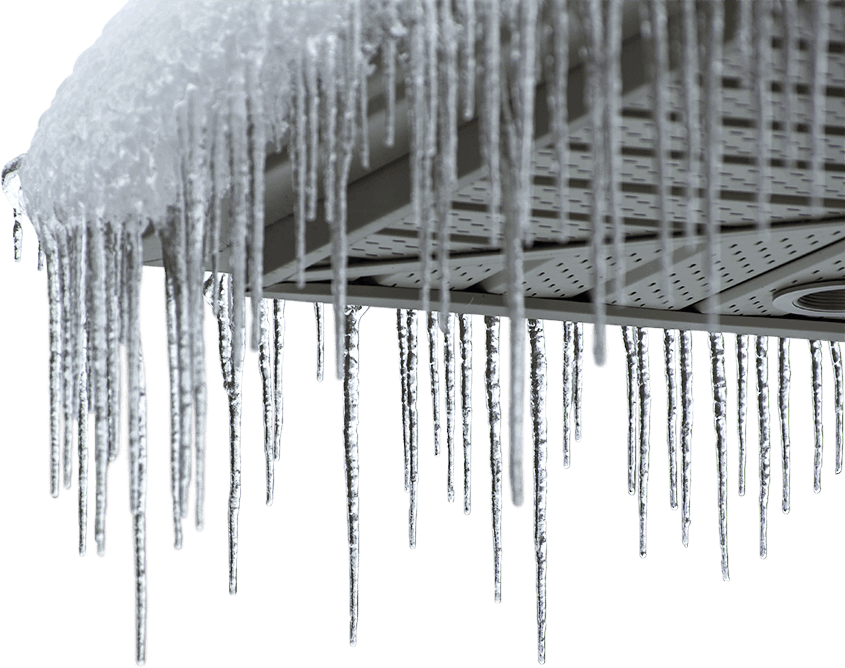 The snow on a roof surface that is above 32°F will melt. As water flows down the roof it reaches the portion of the roof that is below 32°F and freezes. Voila! – an ice dam.

The dam grows as it is fed by the melting snow above it, but it will limit itself to the portions of the roof that are on the average below 32°F. So the water above backs up behind the ice dam and remains a liquid. This water finds cracks and openings in the exterior roof covering and flows into the attic space. From the attic it could flow into exterior walls or through the ceiling insulation and stain the ceiling finish.

Prepared by the University of Minnesota Extension & U.S. Department of Agriculture. 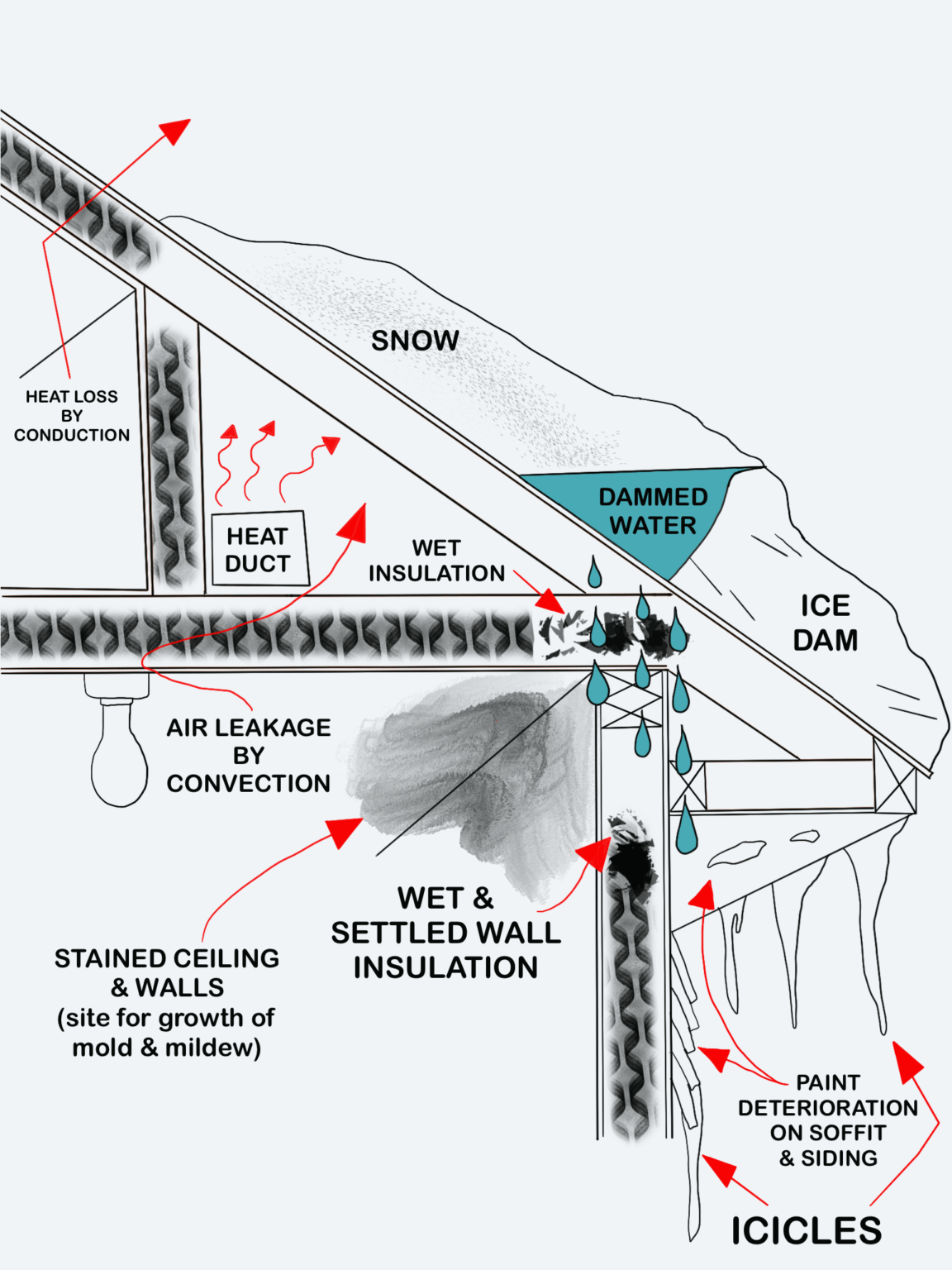 Since most ice dams form at the edge of the roof, there is obviously a heat source warming the roof elsewhere. This heat is primarily coming from the house. In rare instances solar heat gain may cause these temperature differences.

Heat from the house travels to the roof surface in three ways: conduction, convection, and radiation.Conduction is heat energy traveling through a solid. A good example of this is the heating of a cast-iron frying pan. The heat moves from the bottom of the pan to the handle by conduction.

If you put your hand above the frying pan, heat will reach it by the other two methods. The air right above the frying pan is heated and rises. The rising air carries heat/energy to your hand. This is heat transfer by convection. In addition, heat is transferred from the hot pan to your hand by electromagnetic waves and this is called radiation. Another example of radiation is to stand outside on a bright sunny day and feel the heat from the sun. This heat is transferred from the sun to you by radiation.

There is another type of convection that transfers heat to the attic space and warms the roof. In Figure 1, the winding arrow beginning inside the house and going through the penetration in the ceiling, from the light to the attic space, illustrates heat loss by air leakage. In many homes, this is the major mode of heat transfer that leads to the formation of ice dams.

Exhaust systems like those in the kitchen or bathroom that terminate just above the roof may also contribute to snow melting. These exhaust systems may have to be moved or extended in areas of high snowfall.

Other sources of heat in the attic space include chimneys. Frequent use of wood stoves and fireplaces allows heat to be transferred from the chimney into the attic space. Inadequately insulated or leaky ductwork in the attic space will also be a source of heat. The same can be said about kneewall spaces.

So it is primarily heat flowing from the house that is causing the nonuniform temperatures of the roof surface leading to ice dams.

Preventing and dealing with ice dams

In all West Michigan communities it is possible to find homes that do not have ice dams. Ice dams can be prevented by controlling the heat loss from the home.

Both of these actions will increase the snow load that your roof has to carry because it will no longer melt. Can your roof carry the additional load? If it is built to current codes, there should not be a structural problem. Roofs, like the rest of the home, should have been designed to withstand expected snow loads. In Michigan, plans showing design details to meet expected snow loads are usually required to receive a building permit. The plans for your home may be on file at your local building inspection office. To help you understand the plans, or if you cannot find plans for your home, you may want to contact an architectural engineering firm. A professional engineer should be able to evaluate the structure of your home and answer your questions about the strength of your roof.

Mechanical attic ventilation IS NOT a recommended solution to ice dams in Michigan. It can create other attic moisture problems and may cause undesirable negative pressure in the home.

Premier’s professionals can deal with the heat transfer problem that creates ice dams. A blower door test should be used to evaluate the airtightness of your ceiling. In addition, an infrared camera can be used to find places in the ceiling where there is excessive heat loss.

Interior damage should not be repaired until ceilings and walls are dry. In addition, interior repair should be done together with correcting the heat loss problem that created the ice dam(s) or the damage will occur again.

The second absolutely necessary practice is to construct a continuous, 100% effective air barrier through the ceiling. There should not be any air leakage from the house into the attic space!

Recessed lights, skylights, complicated roof designs, and heating ducts in the attic will all increase the risk of ice dam formation.

See What Your Neighbors Have To Say

Austin really delivered. Our roof is 25 years old and now is better than new. Austin, the foreman Kyle, and the entire crew did an outstanding job on the roofing and on the cleanup. Thank for a job well done.
Read More...

Austin at Premier was a joy to work with. Very thorough in explanation to a first time home owner, made sure I understood what it would cost, how things could change, and what the process would look like start to finish. Despite some un...
Read More...

Highly recommend Premier Roofing. Dave came to my home on the same day I placed a call regarding a leak from my ceiling. He did a thorough evaluation of the problem on the roof, and provided a fair estimate within a day. Dave placed ...
Read More...

Austin was able and willing to come by the same day we called to check out a roof leak we have. He was able to secure the leak and ceiling until Spring time when we are able to get the leak fixed. Thank you for taking the time to ensure...
Read More...

Premier was recommended via the web & another roofing company due to their expertise in flat roofs. Mike Horton was extremely professional and honest during his assessment and throughout the entire project. Because of his knowledge in...
Read More...